‘BUSY parents wish they had more time to read with their kids but are struggling to find the spare minutes and energy each day to give them the crucial one-on-one attention.

A Newspoll survey, done exclusively for the Hobart Mercury, has revealed 60 per cent of parents wanted to read to their children more often and the main thing standing in their way was only a lack of time or energy.

Experts warn that children who miss out on core literacy skills from learning to love books at a young age could be left lagging their classmates in their school years.

And, while surveyed parents almost universally accepted that sitting down with their child and a book was important, only about a third said they had struck the right balance.

Sheila Degotardi, from Macquarie University’s Institute of Early Childhood, said parents sharing a book with their children was “exceptionally valuable” for their future reading and writing skills.

Young mums were most likely to say they had too little time, whereas dads were more prone to cite working late hours and tiredness for being less involved in their child’s reading than they would like.

Australian Scholarships Group chief executive John Velegrinis said parents often complained they were “time poor”, but it was key that mothers and fathers were involved in their child’s reading during the vital early years.

“It doesn’t take hours and hours. Most of us can find five or 10 minutes for our most precious resource, which is our children,” he said.

Of the parents surveyed, 53 per cent said they read to their young children at least once a day but 11 per cent said less than once a week.

Mother-of-three Lizzie Trevan said it wasn’t easy to find the time every day to read to her children, but she had developed the routine of reading to them each night.

“I like reading and it’s something I would like them to do for their own enjoyment when they grow up a bit,” she said.’ 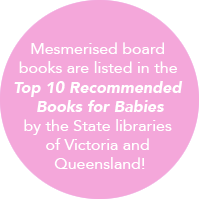 Katey Love, creator of the Mesmerised range, is an Australian designer and illustrator. She has 2 daughters and a cat called Pippi, and lives in Hobart Tasmania. She is passionate about sharing the benefits of black-and-white books for babies... Read More…

Books & flashcards designed for baby's visual development. You will be amazed at how your baby responds to black & white images. Wholesale available.

It’s on again - clearance sale! And just in time

For the month of November we will be donating $1 f

Flashcards are back in stock!! Yay! #babyflashcard

Isn’t this just the best!! This little chap star

Our cloth books are now printed on a very durable

Babies are never too young to enjoy black and whit

Back at life drawing class today after a 2 year hi

Just hanging out with my Mesmerised book while mum

This little tot is enjoying the dots! We often hea

I know it’s Mother’s Day this weekend, but jus

Mesmerised books are back in stock!! COVID has pla

Hangin out with our new foster kitties 🐱🥰 #f

It’s a funny thing, but over the years we’ve r

Only 16 days old and so captivated with his Mesmer

These lovely bunny rattles have just arrived and t

I’m absolutely in love with the colours on our n